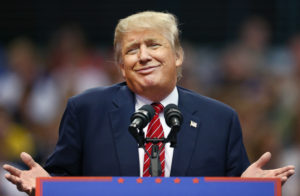 “The court determines that plaintiffs have convincingly argued that the term ’emolument’ in both the foreign and domestic Emoluments Clauses, with slight refinements that the court will address, means any ‘profit,’ ‘gain,’ or ‘advantage’ and that accordingly they have stated claims to the effect that the president, in certain instances, has violated both the foreign and domestic Clauses,” Missette wrote in his ruling.

With Citizens for Responsibility and Ethics in Washington (CREW) acting as co-counsel, the state of Maryland and the District of Columbia have argued in their lawsuit that the frequent use of the Trump International Hotel in Washington, D.C. by state governors and foreign officials constitutes illegal payments to the president.

In addition, the Trump International Hotel has rented space “to the embassies of Kuwait and the Philippines and hosted visiting leaders from Malaysia and Romania,” since Trump took office, and has reported $150,000 in “foreign profits” in the last year, according to the Washington Post.

Further, Trump has not fully divested himself from the Trump Organization, which owns the hotel and his other properties all over the world. Instead, he handed over control of the business to his two eldest sons, Eric and Donald, Jr., but receives business updates on the organization’s finances and is able spend money from accounts related to said businesses.

U.S. District Judge Peter Missette did not buy the Trump administration’s argument that a violation of the Constitution’s emoluments clause—which states that a president cannot accept gifts or benefits from state officials or foreign governments—must involve a bribe that is explicitly offered to the president.